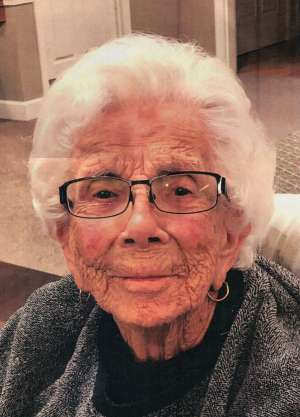 Helen Brown Eakins, 102, of Waynesville, passed away Tuesday, January 7, 2020 at Ohio Living Quaker Heights, Waynesville, Ohio.  Her husband, of 66 years, Amos “Mike” Eakins, preceded her in death.  Mrs. Eakins was born August 28, 1917 in Clinton County, Ohio, daughter of the late Herman and Meda Conner Brown.  She was a graduate of Kingman High School.

Helen retired in 1976 after a 36-year career with the General Motors Corporation.  She was a member of Sharon United Methodist Church.  Helen was active in the Harveysburg Community Helpers Club, the Wilmington Writers, the Creative Hearts Poetry Club, and the Xenia Horseshoe Club.  She competed in horseshoe pitching and was inducted into the Ohio Horseshoe Hall of Fame in 1997.

In addition to her husband and parents, a daughter, Suzanne Meglan, two brothers, Carl Brown and Harry Brown, a sister, Winona Moore, and a grandson-in-law, Brian Snell, are preceded in death.

In lieu of flowers, memorial contributions may be made to the American Cancer Society, P.O. Box 22478, Oklahoma City, OK 73123.

To send flowers to the family or plant a tree in memory of Helen (Brown) Eakins, please visit our floral store.